Introducing the Snapstar Squad, a trendy group of BFFs sharing their loves of style, fashion, travel, food and music. These six Snapstars are ready to take on the world!

The six Snapstar dolls each come with their own unique style reflected in their clothes and in their accessories. The Snapstar dolls are super-easy to pose and accessorise. The clever combination of physical play and digital play via the easy to use Snapstar app allows children to get creative and share their Snapstars cool travels with the world.

The Snapstar Squad have their own Instagram and YouTube channels which offer a great way to interact creatively with the Snapstar dolls’ world.

What Are the Snapstar Doll Names?

Fabulous Izzy, the Master Crafter, won’t let anything go to waste. She is passionate about the environment and recycling, and will find a way to craft something from anything.

Yuki, the music lover, always makes sure that her friends are on the VIP list. Whether laying down tracks in the studio or DJing live, Izzy always has the coolest EDM tracks.

Lola, who is 99% unicorn, is passionate and positive, changing the world with kindness.

Aspen, wide-eyed with wanderlust, wants to travel the world . . . but only with her Snapstar Squad BFFs.

Beautiful Echo, dazzling babe, with all her grace and easy going outlook, Echo is never out of place wherever she goes.

Dawn, diva fashionista, always know where the party is, Diva knows what she wants and knows how she will get it.

The Snapstar app adds even more versatility to styling the Snapstar Squad.  Use the green posing stand to strike a suitable pose for your Snapstar, place in front of the green-screen and choose from a selection of backdrops to bring the dolls into the digital world. Travel the world or simply add some style, alternatively, you can select a backdrop from your own photo-roll. There is more functionality and customisation to look forward to as updates are rolled out to the current app.

The Snapstar Studio app is available for both iOS, from the App Store, and Android, from Google Play.

There are a selection of official Snapstar tutorials to watch online covering how to use the posing stand, green screen and backdrops as well as how to apply make-up and how to use Snapstars’ hair and accessories.

Snapstar dolls encourage imaginative role play with the combination of physical and digital styling. Each Snapstar doll comes with a green screen and a green posing stand to be used with the Snapstar Studio app to add backdrops to your Snapstar snaps.

The dolls are sold separately and include:

Additional clothes and accessories are also available and sold separately.

Snapstars are set to be one of the coolest doll collections of 2019 – super-easy to use and great fun to play with. 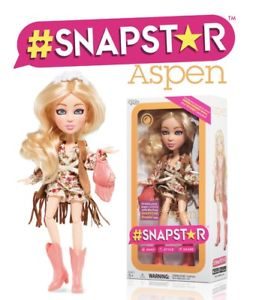 GoAsk4.com is a participant in the Amazon Services LLC Associates Program, an affiliate advertising program designed to provide a means for sites to earn advertising fees by advertising and linking to (“GoAsk4.com” amazon.com, amazon.co.uk or endless.com, MYHABIT.com, SmallParts.com, or AmazonWireless.com)
© 2020 New Toy Reviewer.
**************